Economics and Politics are undeniably intertwined. This is true because of the following reasons: 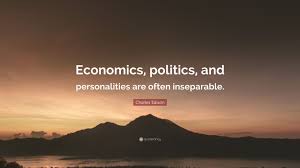